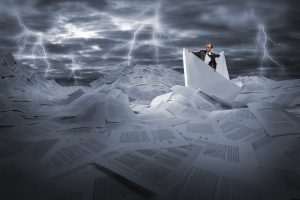 Press officers and agencies that cannot separate themselves from their fair-weather marketing will consistently ignore the following warnings for fat cups in crisis communication. The PR super-Gau is then usually only a matter of time:

Crises have a dynamic that is difficult to control. The attempt to cover up negative information in order to be able to play for time or to avoid liability risks almost always fails in the long term. There are no perfect crises. The communicative interest rate that must be paid for such a foul inevitably leads to the loss of credibility, customers and market shares.

Knowledge means power. The idea of management sharing this knowledge about the seriousness of the situation with the public makes this target group fall into “Ohn power”. In order not to have to show the weakness, the communication department and all the employees involved are given a muzzle. Here, too, the media’s own dynamics are underestimated and at the same time the seeds of a later revelation story are sown. The employees taken hostage could later poison the working climate.

With injunctions, sharply calculated settlements and the threat of counterclaims, damage to the image can only be partially avoided. Lawyers are valuable allies for corporate communications, especially since they also have a natural gift for intuitively recognizing risk potentials. However, press releases that have run through a legal grey filter usually seem bloodless and unauthentic. The crisis company must first show ethical responsibility, humanity and greatness before any legal quirk. That is the task of public relations, not legal affairs.

A crisis is complex and it takes some time for the powder vapor to have disappeared and the damage can be fully assessed. At this stage, one runs the risk of making statements for something that one does not understand and which turns out to be a mistake afterwards. Their own ignorance can quickly be interpreted by disaffected citizens, politicians and journalists as a “deliberate lie.” Crisis communication must therefore always focus on a descriptive narrative style and avoid personal interpretations and evaluations.

A real crisis always needs a hero and a culprit. This is the unproven credo for any successful Hollywood film. Successful crisis communication must instead be unspectacular and, from a journalist’s point of view, unspectacular and worth reporting. Even if a surge of the crisis into the radio, Internet, newspaper or television cannot be prevented, there is a high probability that alternative news will eventually overlay one’s own event again. Internal power games instead provide free bonus material for a management soap opera and a procrastination of the crisis.

A crisis calls for rapid but also thoughtful action. A word once uttered in anger can no longer be captured and may be incorporates future options into PR. Corporate communications, which themselves are under the pressure of time from the media, now have the task of protecting the crisis unit from the sudden flood of requests. At the same time, targeted information must be collected from managers and their crisis advisors in order to provide guidance to customers, employees, shareholders and other stakeholders.

Crises are often referred to by companies as “small incidents” or “misunderstandings”. The public is right to respond to this misunderstood euphemism only with sceptical glances. It is believed that management did not recognize the seriousness of the situation. Thus, a “broken pipe” quickly becomes an uncontrollable story about an “explosion” that allows for completely new associations. PR managers should get used to avoiding unnecessary scaremongering, but still call things by the right name.

Crises are absorbed into our collective memory as soon as they get a face. A management that gives a well-prepared press conference in a pinstripe suit, instead of distributing blankets to the population on site in the crisis area and in a work suit, is one of the typical but avoidable fat cups. Just like the Victory sign after a won trial, instead of humbly but contentedly accepting the positive court decision. Corporate communication must and can develop a sense of future crisis images and photographic scenarios.

A crisis does not automatically mean the end of a company or a personal career. A crisis can be an opportunity for a much more intensive communication policy and for a more honest approach to customers and other stakeholders. Crucially, the company management and its communication experts credibly demonstrate the lessons learned from the crisis, how to rebuild the brand core through confidence-building measures and how to overcome future challenges in general. However, a passive “business as usual” attitude would be wrong.

Crisis and event communication follows its own rules and always require a case-by-case analysis. Nuances of the choice of words can already decide the outcome of the crisis. The list of ten mortal sins can therefore only be a warning of the gross mistakes.

Truck cartel as a PR challenge